Emiliano Zapata once famously said, 'It is better to die on your feet than die on your knees...' 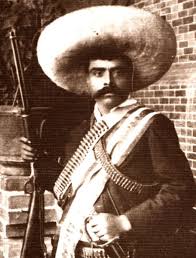 With aged and framed pictures of Zapata on the walls, I hoped for a fighting burrito, a little donkey that would march into my dreams. It was an all inspiring feeling upon walking in with pictures of Mexican heroes gazing down upon me, whispering messages of revolution and independence, much like the somewhat uncomfortable creepy scene from Dead Poet's Society, where Robin Williams paces back and forth behind very eager young rich boys whispering, 'Carpe Diem' in a very Catholic-Priest-Kind-of-Way.

For me, it was Zapata, whispering, 'Go my friend, eat like the hero that you were born to be and eat the burrito that is fit for heroes.'

With this in mind, I stared back at the rather nice but rugged man behind the register, who gave me a glance of welcome, tinged with a sense of 'outsider'. I looked for the tumbleweed rolling by, but did not see one. I inhaled, asked for a veggie burrito and threw down my coin and exhaled. Zapata gazed - Go forth mi hijo... I went forth and anticipated a revolution with the pico de gallo, pinto beans, brown rice, salsa, lettuce and cheese - I turned a blind eye to the lack of specificity in each ingredient, but thought to myself - what would Zapata do? Go forth mi hijo.

Independence on the horizon, I was pleasantly surprised by their 'avocado salsa', a welcome departure from chipotle, salsa fresca, and the like. I anticipated a victorious climb to culinary delights a la mexico. I sprinkled my avocado salsa on what I like to call the 'brimming rim' of the burrito and took my first bite. Mostly tortilla - a bit lardy. Another bite - 'balance' I cried! A burrito must have balance between the ingredients, and in this case, the unspecified ingredients! A bland burrito that comes from the loins of Zapata? Surely not - flavors were lost, non existent and I was reduced to dousing my burrito within a cocktail of salsas, including the avocado salsa, which for all intents and purposes, is all that I left thinking about.

Sadly and bereft, I retreated from the hope of victory, and within a second, lived an impecunious lifetime where a fictitious alter ego rotted away thinking of a cowardly day when I fled from Zapata's leadership.

I wonder if Dead Poet's Society is on Netflix? Adios hijo...