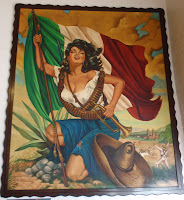 Written by Casey Deeha -                                                                 The irony of Cinco de Mayo in relation to Taqueria La Cumbre's emblematic image of a scantily dressed woman in a victorious pose (right) presents a certain duplicity that relates to their red chicken burrito. It is, indeed, an interesting image - it is as if the woman won independence for her beloved Mexico purely through sexual means, perhaps propositioning soldiers as she pranced through the battle field donning bullet belts and a 'horn'. What is the image attempting to say? That while Mexico is a proud country, it can only be so with cleavage? I'm not sure, but perhaps the duplicity of Cinco de Mayo celebrations in the US can help to understand this interesting 'double think'. At its root, Cinco de Mayo is a celebration of when the Mexican army over turned the French in Puebla. Surely, that's no easy task, but why has it been so fervently adopted by overly-caffeinated-Starbucks-drinking-white-America? One visit down to Old Town in San Diego, you'll quickly have your answer: it's another excuse to slosh oneself in copious amounts of liquor while inhaling nachos and cheese - SUV driving-backwards-hat-wearing Frat boys love it. Of course, I hazard to to take away any significance of the holiday from the Mexican culture, but there is certainly an inherent duplicity which I find intriguing. You only have to ask a common celebrator of Cinco de Mayo what the holiday is predicated upon and they'll give you answers such as, 'Mexican independence' to 'I don't know'.

In considering this dichotomy, it's only fitting that Sal and I come to Taqueria la Cumbre for our Cinco de Mayo celebratory burrito given that it was rated in 2009 by Maxim as 'one of the best burritos in the nation' (see right). It would seem that La Cumbre can't really escape scantily dressed women in relation to their burritos... but what a treat we would have in store for ourselves. However, the theme of 'duplicity' runs deep and while I can firmly place their veggie burrito within the 'good' Mission Style Burrito category, I certainly can't say the same for the 'Red Chicken' burrito - the chicken was very dry which provided a rough chew. It was a case of what can appear on the outside doesn't necessarily reflect what's on the inside in possibly much the same way as the two women depicted. I mean, what are these two women thinking - 'I'm so happy to have just won independence that I shall show a pseudo-sexual pose and my partial breasts to express this'; 'I'm happy to show sex because that's all I'm worth'? I'm not so sure.
Having said all this, who says that duplicity is bad; if one turns inward, we'll find duplicity. If you're reading this review on an Apple Mac, for example, ask what duplicity lies buried beneath when considering what 'image' you desiring to adopt while simultaneously considering that Apple exploits tax loopoles to avoid paying over $640 million in California state taxes - roughly the amount that would keep our state universities afloat. But who cares - it's sleek, shiny, runs well and I'm writing on right now.
Duplicity for all!
Salsa Rating: Veggie Burrito - boarding on hot; Red Chicken Burrito - Mildly Warm.