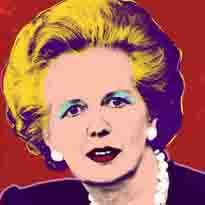 Before entering into politics, Margaret Thatcher utilized her Oxford chemistry degree in order to help design a new form of ice cream that helped to disperse the base ingredients by adding air, therefore saving on production cost. Her first success, bizarrely, was inventing a new foodstuff. Some of my favorite anecdotes about Margaret Thatcher post-demise, contained complimentary sentiments like- ''she had the courage of her convictions; she was ruthless, methodical and dedicated'' and, my favorite- ''she wasn't afraid to be unliked.'' I suppose one might be able to say the same kinds of things about other memorable characters such as,Ted Bundy perhaps ( just a thought). For obvious reasons though and unlike Maggie the deregulator, Pinochet harborer and ice cream mutilator, he didn't end up with a British military funeral, so that kind've definitively sets them apart, I suppose.

Maggie springs to mind whilst I am waiting one sunday morning for my huevos and chorizo burrito (a rather fancy breakfast burrito version) at Cactus Taqueira in Rockridge. Cactus is reputedly a very successful entrepreneurial venture. It perpetually has a line out the door, it's well positioned right outside the Bart station, is large, airy, well designed and has a serving method that is extremely methodical. The whole enterprise is the kind of start-up wannabe Chipotle-esque mexican food enterprise that would have made the likes of Lady Thatcher herself beam with pride at the strength of successful business venture.

Having ordered, I take my place near the counter with my #2 order receipt squashed in sweaty- anticipatory palm, eager to receive my order of huevos and chorizo burrito. # 1 order is immediately up, and some of the anticipatory tension is dispelled as I watch the well-oiled cactus team beavering away to get my food to me. Then order, 4? and then 7? and then 3? and then 5 and so on.. until order number 12 has been served. By this time it has been about 20 minutes and the thatcherite in me is getting decidedly more cynical, and starting to feel a little marginalized. I lean over the counter to flash my order number at a member of staff-
''Ah, oh yes,'' they smile awkwardly, and rush to begin making my food.

Now, probably much to your surprise, I actually tend not to be an asshole about this kind of thing ( bar my decision to mention it, I concede) because there is truly nothing I like more, or find more amusing, than human error. Take me to see a Jaques Tati movie, and I'm yours, or if you're really cheap, I even enjoy pretty basic out-take and candid camera shows too.They are a platform to showcase the true generosity and also the lack there of, of fellow human beings. Mostly though, I just like that people look funny when they say the wrong thing or fall over and run into things. So, anyway, in the long run and quite ironically, their fuck up could have earned them bonus points, and it definitely didn't negatively influence the experience too much.

When it arrived, the burrito itself was large, hot, the tortilla a little bit cling-to-the-front-of-my-teeth, but not bad; the chorizo and egg, nice. The green onions were a good addition, but in all, the combination was a little to rich for the large scale of the burrito and by the end (I know I didn't have to finish it), I felt reasonably nauseous. I'd go there again on a really starved morning if I happened to be in the area, but I can't say it holds a candle to my El Faro breakfasting experience.  The salsas on the other hand, are very good, particularly the salsa de pina, which has a distinctive pineapple flavor.

If my breakdast burrito was not the best tasted, but Cactus is clearly one of the most popular taquerias in the area, what then, makes a food business successful? I don't necessarily believe any more that it can be enough just to have the best tasting product and maybe that's not entirely a bad thing. It seems that ever-increasingly (especially with regards to Chipotle and Cactus Taqueria), the public are deliberately opting for a clean, accessible and well-positioned taqueria, and naturally sourced ingredients, over anything that prioritizes the culinarily traditional. Does this mean the end for the old names in Mexican food? I hope not.

Maggie, I reckon, would be right there with the public's desire for cleanliness and convenience; along with her own, invaluable, convenient and pioneering contribution to the modern food chain: air pumped whip ice cream.

Thank goodness for Maggie, now the world surely is a better place; what a woman.