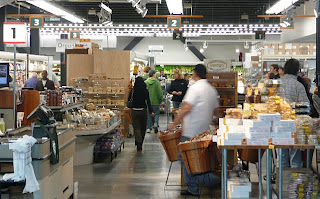 One of these days, I'll actually be able to park my car at the Berkeley Bowl within 10 minutes, but despite that unlikely hiatus from the regular ant hill parking experience, it won't make the food taste any different. Thankfully, I venture beyond this irrelevance...

Inside the bowl, the ants are massing with their shopping carts to hand, filled with an abundance of whole grains and only-just-murdered fruit and vegetable stuffs, as if it were good for you or something. Glad I'm not part of THAT team, I sashay my un-ant like burrito-eater butt towards the deli counter. I've only just chosen from the selection given on a hanging menu board (and reached the end of the line) when a worker ant at the counter thrusts some kind of multiple choice questionnaire into my hand. ''But… I just wanted a fish burrito?'' I stammer. The worker ant waves at me dismissively, mutters something about the questionnaire and moves me to one side so that one of the more experienced car-parkers can hand in their already completed form. Unperturbed (not) about the fact I have to start over, I consider the pamphlet, and this should be easy, it's like Chipotle but without the constant, raised voice repetition of ingredients over the top of the deli counter, right? No, this is a real GAME; it's like they want to make it a bad experience or something- that, or I'm being punished for not mass-consuming their murdered nature. Are they watching me? Is this close-circuit TV? Do they know what this FEELS like inside?

Having made my multiple choice selections (most likely badly and completely oblivious to what it is actually going to cost), I stand back to observe the human conveyor belt at work. As the ingredients start to pile up, I begin to sweat… it doesn't look, viable… how will they wrap that? The food elements need to be contained within the tortilla at the very least for it to be qualifiable, surely? WHY SO MUCH LETTUCE? The result is enormous, and not cheap. The selection of contents all compliment each other, but then, I chose them? Predictably, there is too much lettuce, but (if I'm generous) that's partly because I was too weary from the questionnaire debacle to muster an objecting yell at the conveyor belt when it was relevant, (and, if we accept that the worker ants cannot themselves be discerning).

Some of the nature-gatherer/murderer ants have swarmed my way and are looking at me with concerned expressions. For once, I'm on their side; there is quite a lot not right about this ant-eater burrito, but most of what's wrong is the sheer cheek-blushing volume of the damn thing. I make my best 'of-course -I'm-not-going-to-eat-the-whole-thing-at once-that-would-be-repulsive,' face at them and sneak out to scarf down the rest in my poorly parked vehicle.

Not great, but not so bad I wasn't too proud to finish it.